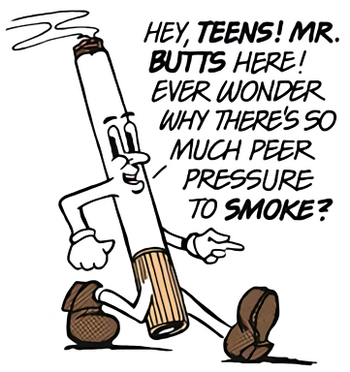 A sub-trope of Anthropomorphic Personification, this is the representation of vices that are drunk, smoked, snorted, ingested, injected, or even gambled as people or animated anthropomorphized objects.

This trope is frequently done for the purpose of warning about addictions, and the depiction can often come across as Anvilicious. Other times, this trope will be employed in a less serious and more light-hearted fashion.

Can also apply to situations where a vice that's named after a person is used in a sentence as if it were a person. As in "My friends Jack [Daniels], Jim [Beam], Joe [Camel], and Mary [Jane]." Additionally, a woman may invoke the Heartbreak and Ice Cream trope by saying she has new boyfriends, Ben and Jerry. Someone may also invoke self-intimacy by saying that their date is Jill (based on representing the thumb and index finger as "J" and the other three fingers as "I, L, L") or Rosie Palms.

Compare Food God, who embodies fertility instead of vice, and Embodiment of Vice, an otherwise normal character who represents a negative quality.