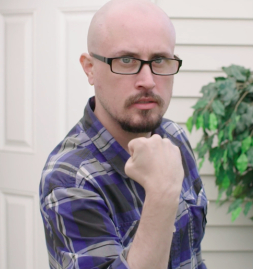 He's better known as The Cinema Snob, a character originally based around slasher and exploitation films that Jones felt were unfairly panned by moralizers such as Roger Ebert (hence the wide-rimmed glasses "Snob" wears). Cinema Snob episodes are less frequent these days, but his focus widened to more mainstream films. The line between Jones and the Snob is increasingly blurred, with Jones posting his own standalone reviews with a comedic bent: the most notable of them are his Christian film series and recaps of failed TV shows (Binge Watch). Even these categories are malleble, since Jones has reviewed some acclaimed series, as well, such as Fuller House.

Jones is a part-time screenwriter, film director, and indie film actor. He participated in Ninja the Mission Force, a series by Dark Maze Studios which parodies the ninja films of Godfrey Ho and other 80s "ninjasploitation" films. He also appeared on Radiodrome, pop culture opinion podcast hosted by Josh Hadley, until Brad left in 2013.

He is a featured contributor on Channel Awesome, and remains one of only two contributors to the site outside of Doug's crew after the mass exodus of contributors in early 2018.

Brad also has a plethora of discontinued or off-and-on series, including:

He has also written and produced (and directed, unless otherwise specified) the following films/miniseries:

In addition, Brad is also a recurring guest on other Channel Awesome series, including The Nostalgia Critic and Tamara's Never Seen.