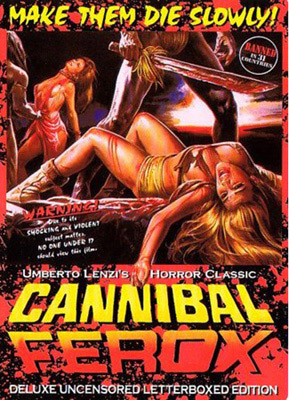 Cannibal Ferox, also known as Make Them Die Slowly and Woman from Deep River is a 1981 exploitation horror film directed by Umberto Lenzi.

From beginning to end, it's a watered-down rip-off of Cannibal Holocaust.

Three college kids, Gloria (Lorraine De Selle), Rudy (Danilo Mattei) and Pat (Zora Kerova), out to write a thesis that cannibalism no longer exists head to South America. Once there, they encounter a pair of drug dealers, Mike (Giovanni Lombardo Radice) and Joe (Walter Lucchini) who claim to be fleeing from a Cannibal Tribe that attacked them. Continuing on until they reach the tribe for some reason, they find the village deserted except for a few members lurking around the fringes. It seems Mike lied; he had actually been forcing the tribe to gather coca and mine for emeralds, and had killed one of them for his own sadistic amusement, prompting the attack. When he kills another one, the tribe decides there shall be no more and goes on a Roaring Rampage of Revenge against the dealers and kiddies. Gorn ensues.

No 70s/80s grindhouse Cannibal Film would be complete without some genuine animal killings; here a rodent is eaten by an anaconda, a monkey is eaten by a leopard, a boar is stabbed, a turtle is dismembered, and an alligator is sliced open. Also; the film's principal marketing point was that it had allegedly been banned in 31 countries. However, a complete list of the countries it was banned in has never been given, and many of the countries it was once banned in have now lifted the ban.