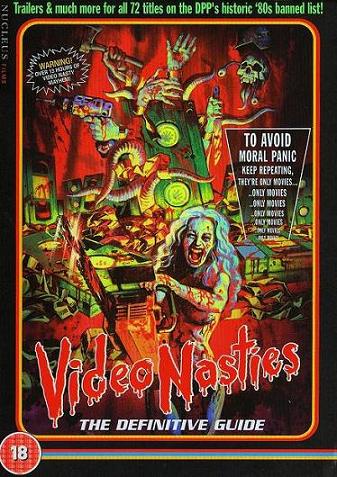 In the 1980s, newly arisen video distribution companies in Britain got the idea to make a fast buck by adapting for VHS cheesy, low-budget and, for the time, rather violent Italian and American horror films of the ilk that would later inspire Quentin Tarantino and Robert Rodriguez. Unfortunately, at the time there was no law that required videocassettes to be classified before being rented and anyone of any age could legally rent any video; so films such as Cannibal Holocaust and I Spit on Your Grave could be (and were) rented by children as young as 10.

Mary Whitehouse, notorious morality campaigner who had recently gained a powerful ally in the Conservative government of the time, was not pleased.

So in 1984, the Video Recordings Act was passed, which made it illegal to distribute any film that had not been classified. The British Board of Film Classification liased with the Department of Public Prosecutions to build a list of videos that had already led to shopkeepers being convicted for criminal obscenity and hence could not be legally distributed in Britain, to which were added a number of videos that were submitted to the BBFC for classification and rejected. Hence was formed the infamous list of the "Video Nasties". This ultimately comprised 74 films, of which 39 had been successfully prosecuted. Video stores renting them were subject to police raids.

Incidentally, one of the causes of the domination of the early home video market by exploitation films was that the major Hollywood studios took quite a while to begin releasing any of their films for home rental, due to fears about damage to the cinema market. Parallels to later media developments can be drawn by the reader...

As time has gone by and society become more liberal about horror movies, many films from the list have been resubmitted to the BBFC. In some cases they were passed with no difficulties, but a few of the more extreme cases were passed only with cuts, only for them to resubmitted again a few years later and released completely uncut in the present day (the most notorious and high-profile case of this being The Last House on the Left). Only a handful of films from the list still remain banned, but usually because they remain so obscure that nobody has bothered to resubmit them.note Of the 39 "official" nasties, seven - The Beast in Heat, Blood Rites, Fight for Your Life, Forest of Fear, Last Orgy of the Third Reich, Love Camp 7, and The Werewolf and the Yeti - have never received BBFC certificates to this day (though only Last Orgy of the Third Reich and Love Camp 7 have been re-submitted). Snuff was passed uncut in 2003 but has yet to receive a home video release. Seven others - Cannibal Apocalypse, Cannibal Ferox, Cannibal Holocaust, Cannibal Man, Exposé, Faces of Death, and I Spit on Your Grave - have only been released with cuts to scenes involving rape or unsimulated animal cruelty. If you are able to find and view these films (most used to be incredibly rare and obscure; what were once considered Holy Grails amongst collectors are now widely available in this age of DVD) you will probably be shocked at how tame some of them are compared to today's standards what with films the likes of Saw and Hostel. In many cases, some films would have been tame even by those days' standards; often films were convicted of obscenity based on the covernote eg. the notorious cover of The Driller Killer showing a man being drilled to death or the Gory Deadly Overkill Title of Fatal Death alone. The featuring of the words "Cannibal", "Zombie" or anything associated with Nazis in the title of a film almost guaranteed inclusion on the list. Other films though, such as Cannibal Holocaust, retain the power to shock and horrify.

It really doesn't take a genius to know what the result of Mary's hissy-fits and the bans were; people wanted to see these films. Naughty little boys, spurred by the media's allegations that these were reprehensible, disgusting, Gorntastic shlockfests that were corrupting the youth and which had been banned for the good of the nation, flocked to video stores in hopes of getting their grubby hands on a copy before the police buried them in landfills. Their infamy instead took on a nearly legendary status; many would have faded into obscurity as generic money-sucking horror drivel and nowadays nobody would know they had ever existed (however, several of them were already wildly successful in their countries of origin and beyond, such as the legendary The Evil Dead (1981) and the Dario Argento films included on the list).

The complete official list of "Nasties" is below. (Bear in mind that some of the more obscure ones have up to a dozen or so alternate titles; the following are the titles by which they were known specifically in the United Kingdom in the early 1980s)

The following films were not included on the list of 39 to be prosecuted, and some weren't even among the 74 targeted for prosecution, but are sometimes mistakenly thrown in because they were controversial in earlier or later eras. Not all of them were ever actually banned in Britain.

The following are works which mention Video Nasties In-Universe or had other connections to the crusade: