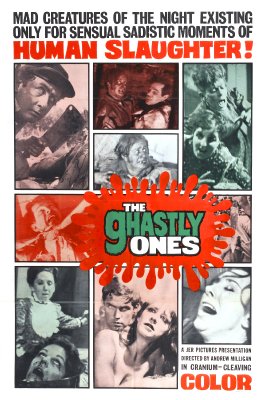 The Ghastly Ones, also known as Blood Rites in the UK, is a 1968 horror film and video nasty directed by Andy Milligan, the so-called Shock King of Staten Island.

When three couples gather in a Victorian-era private island on the Husdon River their only concern is the reading of a will that will reveal which one of the deceased's three daughters is entitled to inherit his estate. Little do they know that a crazed killer stalks the grounds of this very island and systematically murders and dismembers the six visitors as they try frantically to escape his wrath...

Stephen King referred to it in his book Danse Macabre as "the work of morons with cameras".

Not to be confused with the Dresden Files novel of the same title.