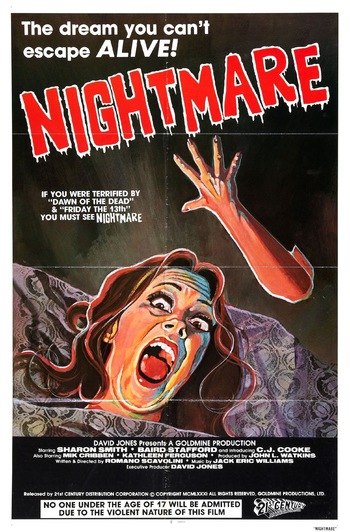 Nightmare (also called Nightmare in a Damaged Brain) is a Slasher Movie released in 1981. It is about a guy who gets horrible nightmares and is getting treatment for it in an asylum. Inexplicably, he is set free and goes on a rampage to meet a family. The story also revolves around the family of a single mother who has two daughters and one naughty little shit called CJ.

The movie was branded a Video Nasty because it is gory and even led to one distributor getting arrested for not cutting one second from the movie.

The film also had a controversy when Tom Savini (who is credited with the spectacular gore effects) claims to have nothing to do with the movie and was only on the set as an advisor for a day or two. The director, Romano Scavolini disagrees and says it was Savini who designed the major of the effects. There are pictures of Savini on the set so the truth is still anyone's guess.