Film / Fight for Your Life 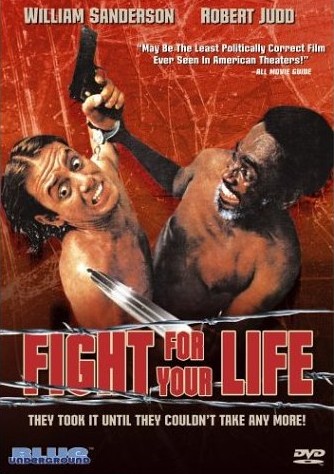 Fight for Your Life is a controversial 1977 Exploitation Film directed by Robert A. Endelson. It is often considered one of the most offensive and politically-incorrect films of all time.

Hate-filled redneck convict Jessie Lee Kane (William Sanderson of Blade Runner fame), accompanied by Hispanic convict Chino (Daniel Faraldo) and Chinese convict Ling (Peter Yoshida) escape from the prison-truck transporting them, steal a car from a pimp and skip the country on the road to Canada. On the way, they rob a convenience store (shooting the owner in front of his baby daughter, and then threatening said baby daughter herself at gunpoint in a particularly disturbing scene), and then shacking up in the house of an African-American family consisting of preacher and level-headed pacifist father/husband Ted Turner (Robert Judd), his slightly anti-white wife, a stern, sassy Grandma, teenage daughter Corrie and brave-spirited young son Floyd; taking them hostage.

The racial slurs fly as the convicts terrorize the family; forcing Ted to tap-dance at gunpoint, raping Corrie three times in a row, and murdering two (white) friends of the family; Karen, Corrie's friend, whom Ling molests and pushes off a cliff, and Joey, Floyd's friend, whom Ling smashes the head of with a rock. Eventually the police, led by Lt. Reilly, whom have been tracking the criminals, manage to surround the house. But the family has by now managed to turn the tables on them, and frankly would rather have their much-deserved own way with them than turn them over...

Better-known films with highly similar plots, if you want to know what it's like, would include Funny Games and The Last House on the Left.