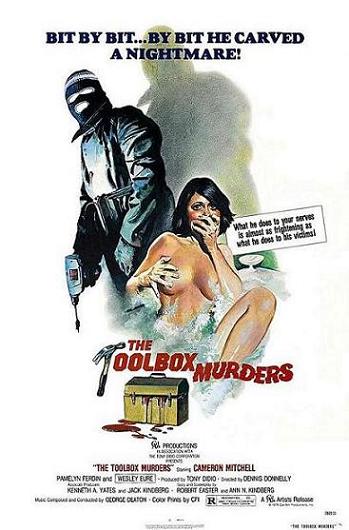 The Toolbox Murders is a slasher-esque film released in 1978.

Set in California in 1967, the film follows Vance Kingsley (Cameron Mitchell), an apartment complex owner who, several months prior to the events of the film, lost his teenage daughter Kathy in a car wreck, a tragedy which sent him spiraling into seclusion and a deep depression, which eventually led to religious mania. Convinced that God took his daughter due to her purity, and that it is ultimately a Crapsack World, Vance dons a trenchcoat, leather gloves and a ski mask and embarks on a killing spree through his apartments, gruesomely murdering female tenants who he views as "unsavory" and deserving of punishment with the assorted nasty contents of a toolbox, such as a drill, hammer, screwdriver and nail gun.

Midway through his rampage, Vance becomes enamored with fifteen year-old Laurie Ballard, a reserved and studious girl who lives in an apartment with her mother Joanne, and older brother Joey. Soon enough, Vance abducts Laurie, and holds her captive in his daughter's old bedroom, which resembles a little girl's. As Vance grows increasingly psychotic, and comes to believe Laurie really is his dead daughter, Joey begins to search for his sister, after the police prove unreliable in both their investigation of the murders, and Laurie's disappearance. Helping Joey out is Vance's somewhat odd nephew, Kent, who has been hired by his uncle to help with all the repairs and clean up needed around the apartments in the aftermath of Vance's nightly forays.

The film had a remake, simply titled Toolbox Murders and directed by Tobe Hooper of The Texas Chain Saw Massacre (1974) fame, in 2004. Besides being set in an apartment complex and having an antagonist who kills with the contents of a toolbox, it was largely In Name Only, and went as far as featuring supernatural elements. After simmering in Development Hell for several years a sequel entitled Coffin Baby was released in 2013..

As a point of trivia, Stephen King has mentioned the original is one of his favorite horror films.

The original film provides examples of the following tropes:

The remake provides examples of the following tropes: