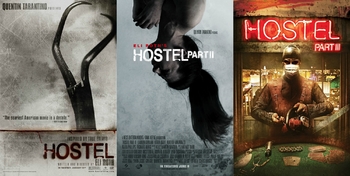 Welcome to your worst nightmare.
Advertisement:

The Hostel trilogy is a series of horror films originated by Eli Roth, released between 2005 and 2011. While Roth wrote, directed and co-produced the first and second films (both notably "presented" by Quentin Tarantino), the third was made without Roth's involvement, being directed by Scott Spiegel and released Direct to Video.

The series centers around Elite Hunting, a secret society of torture clubs, which use Eastern European hostels (basically cheap dorm-style hotels for tourists) and local women to capture victims for the wealthy to kill and torture at their leisure. Each film features similarly unwitting American protagonists who wind up in the clutches of the society while embarking on hedonistic journeys; while the first and second use college students backpacking through Europe, the third centers around a bachelor party in Las Vegas.

Hostel was Roth's first project following the success of Cabin Fever, and assisted in no small portion by the aforementioned Tarantino, a big fan of the film, who pushed Roth to create an original story as he was receiving various directorial offers on horror remakes. All three films utilize the same style, containing Roth's pre-established likings for prominent splatter elements and the occasional Black Comedy, this time presented through the world of extreme torture. In fact, it was the first film that was among the flock that directly inspired the coining of the term "Torture Porn". While its actual applicability to this series is a mildly contentious subject, all three films are definitely not to be watched while eating a bowl of spaghetti.

Not surprisingly, the films saw heavy censorship in various countries as well as fierce criticism from the Czech Republic and Slovakia for their portrayal in the film.note It gets worse: the first film was not only set in Slovakia and filmed in the Czech Republic, it sports people with Russian names (uncommon thereabouts), speaking Russian, and dressed in uniforms that are probably from Ukraine. Also, it portrays the countries as they were in the late 1980s. No wonder both countries were offended. For the record, it should be noted that real-life hostels are emphatically not torture-chambers of any description. While they once had a reputation for being rather disreputable (in that they were largely unpoliced and prone to incidents of theft), recent efforts and gentrification have succeeded in revitalizing the modern hostel as a safe, secure, and family-oriented location.