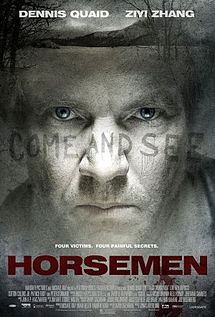 Horsemen is a 2009 American thriller film directed by Jonas Åkerlund and starring Dennis Quaid and Zhang Ziyi. It follows Aidan Breslin (Dennis Quaid) a bitter and emotionally distracted detective who has grown apart from his two sons after the death of his devoted wife. While investigating a series of murders he discovers a terrifying link between himself and the suspects that seem to be based on the Biblical prophecies concerning the Four Horsemen of the Apocalypse: Pestilence, War, Famine, and Death.