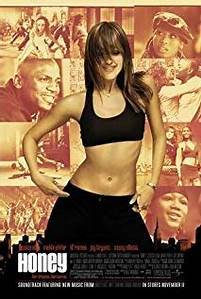 Honey is a 2003 hip-hop dance film starring Jessica Alba as Honey Daniels. It had three Direct to Video sequelsnote Honey 2 got a theatrical release in some countries that didn't star Jessica Alba. The only cast members from the original to appear in any of the sequels are Lonette McKee and Laurieann Gibson both in Honey 2. But all four films have the same director (Bille Woodruff).