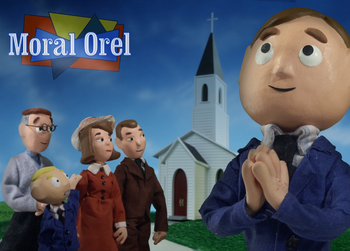 "People know who you are by the words you use, not the things you do."
"Dear Orel:
Always remember, son, even though you are the perfect candidate for brainwashing in this town, you're also too pure and good-hearted to be corrupted.
Love, Grandpa"
— Arthur Puppington, "Beforel Orel"
Advertisement:

In the town of Moralton, Statesota lives the Puppington Family. Twelve-year-old Orel Puppington, a devout Protestant Christian, thinks of Jesus as his biggest role model. He always pays rapt attention in church, taking the advice of the local preacher's sermons to heart, but due to his age, he doesn't always understand some of the topics, which leads to Orel acting on them in his own special way. Needless to say, Hilarity Ensues!

Moral Orel is a Stop Motion animated show that first aired on Adult Swim from 2006–08 created by Dino Stamatopoulos (writer for Mr. Show, Community, and Late Night with Conan O'Brien). Originally conceived as a satire of sitcoms from The '50s and The '60s, and designed to resemble an Affectionate Parody of Leave It to Beaver (not Davey and Goliath, despite the art style), the show, despite copious amounts of Executive Meddling, ultimately evolved into one of the darkest pieces of Western animation of the 2000s. It is notable for being one of the first animated dramedies on television, having come out a near-decade before the critically acclaimed Bojack Horseman hit Netflix.

Every member of Orel's family shows some form of dysfunction: father Clay abuses alcohol, abuses Orel (emotionally and physically), and fails to hide his closet bisexuality; mother Bloberta cheats on Clay, often finds herself depressed, and suffers from obsessive-compulsive disorder; and both parents spoil Orel's rambunctious and disabled little brother Shapey rotten. The population of Moralton (a town placed precisely in the middle of the United States) fare little better; most of Moralton's adults lead lives as dysfunctional as Orel's family — if not more so — while putting on a show of being Good Christians and Good Neighbors.

Moral Orel is less a critique of Christianity itself than a deconstruction of religious fundamentalism. The show aims its real critique towards authority figures who pay lipservice to their inferiors' religious beliefs as a way of preserving their authority — especially when such people make horrible authority figures and role models. In short, it's not a criticism of religion specifically, but of hypocrisy itself.

The show served as an affectionate (and adult-oriented) quasi-parody of the aforementioned Beaver until Dino Stamatopoulos began to move the focus away from Orel midway through the first season, caused by a rough divorce he was going through at the time. He then began to explore the dark underbelly of the seemingly happy-go-lucky townspeople of Moralton, which culminated in the two-part season 2 finale "Nature".

The network higher-ups loved the two-parter, with Adult Swim head Mike Lazzo asking Dino to make the show's third season as dark as humanly possible. Dino complied, but Lazzo and Adult Swim instantly regretted it. The show almost stopped being a dark comedy and instead became a Psychological Drama with only small small bits of comedy sprinkled in (With the third season opener, "Numb" only having one joke throughout the entire episode). While critically acclaimed, the lack of comedy caused Adult Swim to scale back the episode count from 20 episodes to 13 and to cancel the series.

While the show was eventually cut short, fans kept hope alive for a revival. After 2007, Adult Swim only played reruns of the show sporadically, but in late 2011, the network began rerunning the show in chronological order on weeknights. When Dino learned of this, he said "[if] enough people watch, there may be hope for a special or two" on a Facebook post. A month into the reruns, Dino made another comment: "Got a great call from the Head of Adult Swim yesterday raving about the ratings that the Moral Orel reruns have been getting. Great job, everyone! Keep watching and the Moral Orel special will be imminent."

Dino followed up on this on Halloween with a surprise appearance from Orel in the last bump of a Mary Shelley's Frankenhole mini-marathon, where Orel said a new Moral Orel special would come "sometime in the near future". At its May 2012 upfront, Adult Swim confirmed Orel's return with the announcement of Beforel Orel, a half-hour special that [as] promised will explain "the origin of Orel's religious nature and the birth of his brother, Shapey". Beforel Orel aired on November 19th, 2012.

Orel accidentally popularises a song from the POV of Judas, "I Hate You Jesus", and talks to Rev. Putty about it, who takes a bit to realize what's wrong with it.

I Hate You Jesus

Orel accidentally popularises a song from the POV of Judas, "I Hate You Jesus", and talks to Rev. Putty about it, who takes a bit to realize what's wrong with it.

I Hate You Jesus