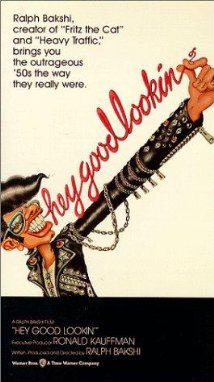 Hey Good Lookin' is an animated film by Ralph Bakshi that was released in 1982. It features the voices of Richard Romanus, David Proval, Tina Bowman, Jesse Welles, and Phillip Michael Thomas.

The film takes place in Brooklyn, 1953, and focuses on charismatic hood Vinnie Genzianna, the leader of a greaser gang named "the Stompers", his friend and second-in-command Crazy Shapiro, and their respective girlfriends Roz and Eva, as they get wrapped up in an escalating conflict with the rival black gang, "the Chaplains", lead by Boogaloo Jones.