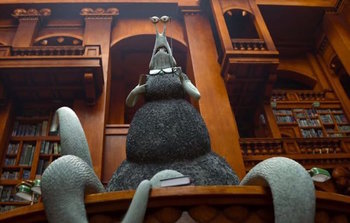 Unsuspecting students will enter the library, in order to talk to friends, goof off, and (possibly) study. However, these kids will soon fall victim to...the Scary Librarian.

The Scary Librarian will freak out if you talk in the library, fail to return a book on time, or, God forbid, spill something on it. They'll shush you at the slightest noise, and occasionally will start screaming. Needless to say, if you make them mad, don't expect any help with your research paper.

The Scary Librarian will, of course, move without making noise themselves, and can appear from nowhere if you're up to trouble.

The Greens have a run-in with the strict librarian who threatens to ban them should they make any sound.

The Greens have a run-in with the strict librarian who threatens to ban them should they make any sound.