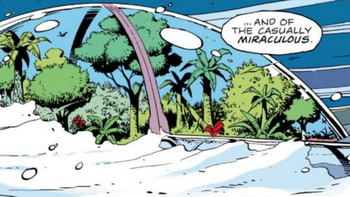 You're not rich until you can buld your own private tropical paradise in Antarctica
"He was disappointed in the world. So he built one of his own — an absolute monarchy!"
— Jed Leland, Citizen Kane
Advertisement:

Sometimes, it's not enough to have all the money in the world; sometimes, only a world in itself will do. For a select few among the super-rich, an ordinary Big Fancy House simply cannot satisfy their desire for a perfect home: instead, for these elite among elites, the only thing that will suffice is a kingdom — a unique, exclusive and often vast tract of land under their exclusive control, in which they can seclude themselves for the rest of their natural lives.

While usually remote, inaccessible or top-secret in some way, the private kingdom may take many forms: some unambitious tycoons are content with building exclusive domains within a city, or even buying out entire hotels just to accommodate them. In the case of traditionalist recluses, they make do with a plot of land containing nothing more than a ridiculously oversized home and enough grounds to encompass a small country. However, more outgoing plutocrats may establish an entire compound of buildings for whatever obscure desires they intend to pursue there. The most ambitious of all may end up building and controlling an entire city.

The reasons for going to such extremes vary — perhaps they simply can't stand humanity anymore, perhaps they desire total executive power but can't be bothered with politics, or maybe they have some particular goal or philosophy to focus on. Then again, for the ultra-rich, usually the only reason needed is "because I can".

May feature a Privately Owned Society if the region is sufficiently populated.

A hallmark of the Eccentric Millionaire, the Mr. Alt Disney, the Howard Hughes Homage, and especially wealthy breeds of Reclusive Artist. Also a possible venue for when The Elites Jump Ship.