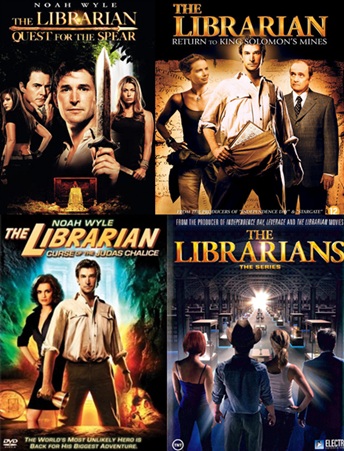 The Librarian films are a surprisingly popular action-adventure/fantasy series of TV movies made for the TNT cable network in the United States. The concept is fairly simple: all the world's greatest and most dangerous treasures (including the literal Goose That Laid the Golden Egg, H. G. Wells' time machine, the Golden Fleece, the Spear of Longinus and the real Mona Lisa (yes folks, the one in the Louvre is apparently a very good fake) are kept in a secret and generally highly secure library, hidden behind a secret door in the Metropolitan Public Library (previously the Library at Alexandria, Egypt, but later moved to the United States), and guarded by the world's smartest and most knowledgeable person... known, of course, as The Librarian.

Very light and tongue-in-cheek but with a surprisingly high budget for a TV movie (they're heavy on both stunts and special effects), the movies take the world's biggest geek, and make him into a bumbling but surprisingly capable action hero who must often travel the world in search of secret or stolen treasures, and retrieve them for The Library, of which he is also the chief guardian. Typically the adventures of course feature a large number of traps and other situations that require ridiculously obscure knowledge and good perception in order to beat or bypass... such as figuring out that an arrow-spewing trap is in time to a waltz (causing the hero and heroine to dance their way across the ancient Mayan death trap), or exactly where they are in the gigantic Amazon rain forest based entirely on the fact that they're within view of a particular endangered species of condor's territory (after they escape by parachute from a commercial passenger plane and land in it... which happens right after Carsen figures out how to read an ancient text after translating the long-lost Language of the Birds in a matter of hours in-flight).

The films are, in short, action-adventure comedy that parodies action adventure movies, with the world's biggest nerd as the action hero. Basically, Indiana Jones meets Warehouse 13.

ER veteran Noah Wyle stars as the title character, Flynn Carsen, a sort of cute but very geeky boy-next-door who lives with his mother in New York, and is a perpetual student with over two dozen degrees; precisely why he's offered the job in the first movie. He's accompanied in each movie by a tough-as-nails companion, who's always an attractive woman in a deliberate subversion of the "brawny man, weak woman" stereotype (Carsen himself can't fight worth a damn when it comes to throwing kicks and punches). Due to actresses' schedules (the one who played the bodyguard Nicole Noone in the first movie took a job as a regular cast member on Boston Legal around the same time), the female companion seems to change in every film, from a bodyguard appointed for his first year, to an archaeologist who happened to be searching for the same thing, to a woman that he was drawn to by destiny. This ends up giving the movies a sort of subversion of a Bond Girl who ends up at least as competent as the Librarian at the action.

The first film (subtitled Quest for the Spear) covers the Spear of Longinus. The second (subtitled Return to King Solomon's Mines) covers the lost mines of Solomon, and the third (subtitled Curse of the Judas Chalice) involves Dracula and the goblet supposedly made after Judas Iscariot hanged himself, using the 30 silver coins he was paid with. The second and third films were directed by Jonathan Frakes, who also has very short cameos in each.

The story continued with The Librarians, which has Wyle reprising his role (initially in a recurring capacity) and is led by Rebecca Romijn as his Guardian, Eve Baird. The series premiered in 2014 and ended in 2018.