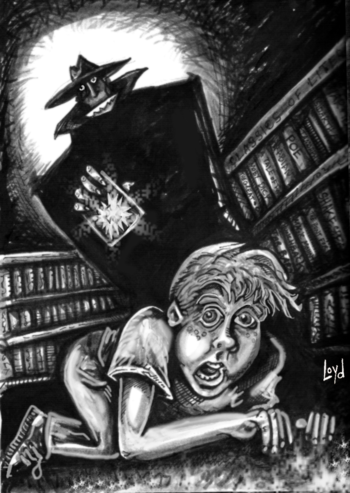 ''I’ve been in the business a long, long time, Sam. And they’re not renewable, so be sure to get them back by April sixth . . . Or else I’ll have to send the Library Policeman after you.''
Advertisement:

Librarians can be intimidating. As everyone knows, knowledge is dangerous, and that means the people who control that knowledge might be dangerous too.

Evil librarians in fiction come in a variety of forms. They can be cult members, who believe either that the world is not ready for any advanced knowledge or are an organization that controls the flow of knowledge. They might even be literal monsters. In these cases, libraries are often perilous.

Sometimes, it's only a single librarian who is evil. If that's the case, they're probably some variety of manipulator, as they're presumably familiar with the human mind from reading so much.

Their reactions to overdue or damaged books might be high fees... or murder.

This will probably overlap with Scary Librarian. Hot librarians may also be evil, as Sex Is Evil.

Often times, works featuring the non-sexy variety of evil librarians will be favorites of actual librarians.