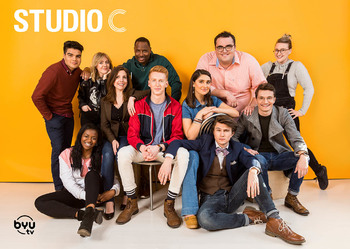 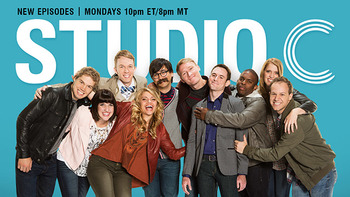 is a sketch comedy show produced by BYUtv created by Jared Shores and Matt Meese. One of the major differences from other contemporary comedy shows is that the comedy is intended to be family-safe, focusing on wordplay and absurdist situational comedy with little to no fanservice or swearing. The original cast members are all former members of the BYU Divine Comedy troupe which is an on-campus sketch comedy show by BYU students. Most of the sketches in the show's first season were directly adapted from Divine Comedy sketches the cast had written. The title Studio C refers to the actual studio where the show is filmed.

The show began in 2012 and began its 8th season in 2017, airing its 100th episode in November of that year. It airs on BYUtv, a television station operated by Brigham Young University in Provo, Utah, but it reaches a much wider audience on YouTube; it should be noted, though, that BYUtv is available across much of the United States via many of the big-name cable and satellite providers (excluding Google Fiber).

The Studio C cast has evolved over time:

To date, the series has won four Rocky Mountain Regional Emmy Awardsnote Due to BYUtv not being in enough households, all of the network's shows are ineligible to be nominated for Primetime, Daytime, or Sports Emmys.

Example of:
Nations as People