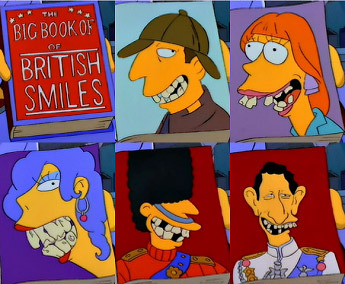 "English Teeth! HEROES' Teeth!
Hear them click! and clack!
Let's sing a song of praise to them —
Three Cheers for the Brown, Grey and Black."
— Spike Milligan, "Teeth"
Advertisement:

Brits in (usually American) media are commonly stereotyped as being completely indifferent to the physical appearance of their teeth. Expect much joshing by the pens of non-Brits at this, portraying British teeth as being a horrific monstrosity.

The reasoning behind this trope has its roots largely in cultural differences. In the United States, having bad teeth is associated with extreme poverty, slovenliness, and/or drug addiction. Braces are a rite of passage for American teenagers whose parents can afford them. Thus there is an enormous cultural stigma to not having perfect teeth. In Britain on the other hand, for various reasons, there is no such class stigma. Indeed the reverse seems to be true: having one's teeth artificially straightened and/or whitened is considered the height of vanity, and cosmetically perfect teeth are often considered unsettling. The American emphasis on flawless teeth is viewed as an expensive indulgence, or slighly snobbily as the sort of thing that only "Essex girls" (Americans, think Jersey Shore) get done. note Though Britain does have a cosmetic dental industry that would love nothing more than to remedy this "lamentable" state of affairs

The reason for Britain's more lax standards on dental beauty are probably related to the National Health Service (NHS). Basic dentistry is only partly covered by the NHS and the cosmetic side isn't covered at all; to sum it up, the NHS is only concerned with making sure your teeth are healthy, not pretty. British people tend to resent having to pay anything for medical care, leaving cosmetic dentistry lower on their order of priorities than in other countries. But as far as actual dental health goes, a 2009 study by the OECD

found that the UK, ironically, has the healthiest teeth in the industrialized world, ahead of the United States even, something backed up by a 2015 study for the British Medical Journal

For obvious reasons, this is almost exclusively an American and British trope, as not everyone outside the English-speaking world has the same views regarding British dental health if they even care about the topic. Also note that this is a national trope, not an ethnic one; a plurality of Americans are of British descent.

For actors having a gleaming smile no matter what kind of character they are playing, see Eternally Pearly-White Teeth, and see Twinkle Smile for a visual effect used to emphasize this.

The Big Book of British Smiles

The image for the trope, a dentist scares his patients into better dental hygiene, using a book of British Smiles.

The Big Book of British Smiles

The image for the trope, a dentist scares his patients into better dental hygiene, using a book of British Smiles.