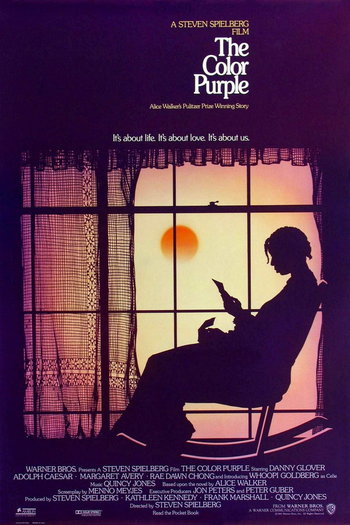 "I think it pisses God off when you walk by the color purple in a field and don't notice it."
— Shug Avery
Advertisement:

A 1982 novel by Alice Walker, The Color Purple was later made into a 1985 film and a 2005 musical. In particular, the film version was director Steven Spielberg's first pure-drama film (and one of the very few Spielberg films not scored by John Williams) and the film debuts of Whoopi Goldberg and Oprah Winfrey.

When we first see the protagonist, Celie, she's fourteen and twice pregnant by her father. Her "Pa" then forces her into a marriage with "Mister," a widower far more interested in her younger sister, Nettie. Fortunately, Celie finds friends with Mister's old flame, Shug Avery, and Sofia, the strong-willed wife of Mister's son Harpo. These friends help Celie find the strength to become her own woman throughout the thirty years the story takes place.

This novel and film contain examples of: