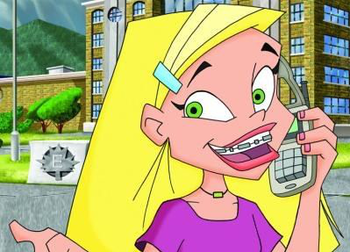 A character wearing braces to signify them as being young and in that awkward puberty stage where they're still growing (usually under fourteen though older kids with these sort of braces aren't uncommon). Often the character looks gangly or nerdy/dorky but by the time they're removed, they've grown into a more attractive and mature-looking individual.
Advertisement:

This is usually done in flashbacks. These are rarely Braces of Orthodontic Overkill but instead are more normal braces made to show that the character is either Hollywood Homely or that they are a Hollywood Nerd.

To show that they are young, characters wearing these tend to be a Burger Fool.

Is Truth in Television to an extent. Even if Hollywood tends to play this up a bit, braces are a common part of growing up, with about four million Americans at any given time undergoing some sort of orthodontic treatment, and about eighty percent of them being between the ages of six and eighteen. Of course, in the real world, braces can be worn at any age, meaning they are not just pubescent.