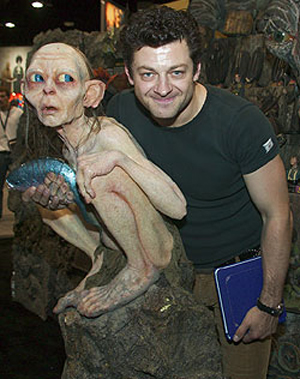 Andy Serkis and his precious.
"LotR launched the career of one man, who must now wear skintight Spandex and face dots for the rest of his life."
— Honest Trailers, The Lord of the Rings

He has three sisters and a brother. As a child, Serkis wanted to be an artist; he was fond of painting and drawing, and visualized himself working behind the scenes in productions. Serkis studied visual arts at Lancaster University. There he became involved in mechanical aspects of the theatre and did stage design and set building for theatrical productions. Then Serkis was asked to play a role in a student production, and made his stage debut in Barrie Keefe's play Gotcha; thereafter he switched from stage design to acting, which was a real calling that transformed his life.

In 1999, Andy Serkis landed the prize role of Gollum in Peter Jackson's epic film trilogy based on J. R. R. Tolkien's saga The Lord of the Rings, which quickly made him the best known motion capture performer in the movie industry, and Trope Namer for Serkis Folk. He spent four years on the part and received awards and nominations for his performance as Gollum, a computer generated character in The Lord of the Rings: The Two Towers (2002) and The Return of the King (2003) which won eleven Oscars.note  Many people feel Serkis should've at least been nominated for an Oscar for his performance as Gollum, but the Academy jury is still out on whether Serkis Folk performances are acting in the traditional sense that might fall under acting award criteria, instead of lesser special effects categories. Notably, Smeagol/Gollum's distinct voices were achieved with little to no computer trickery - Serkis can and does do them at live appearances. Serkis also used this art form in his performance as Kong in King Kong, which won him a Toronto Film Critics Association Award (2005) for his unprecedented work helping to realize the main character, and a Visual Effects Society Award (2006) for Outstanding Animated Character in a Live Action Motion Picture.

In 2011, Serkis parleyed his experience with Gollum and King Kong into the foundation of his own visual effects studio, The Imaginarium, which specialises in providing performance capture for motion capture characters in films, TV, and video games.

At the end of 2018, Serkis made a return to make a satirical video

crossdressing as British Prime Minister Theresa May while acting in-personality as Gollum and Smeagol as a Take That! to her Brexit strategy.

Andy Serkis and his works provide examples of: