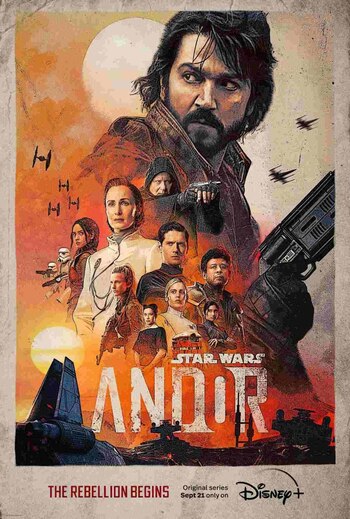 All for the Rebellion.
"Cassian Andor. It don't matter what you tell me or tell yourself. You'll ultimately die fighting these bastards. Wouldn't you rather give it all at once, to something real?"
— Luthen Rael
Advertisement:

Star Wars: Andor, marketed as simply Andor, is a Disney+ Spy and Space Opera series created by Tony Gilroy and set in the Star Wars universe.

Set five years before the events of Rogue One, the series follows rebel spy Cassian Andor (Diego Luna) during the formative years of the Rebellion against the Galactic Empire.

The first season premiered on Disney+ with three episodes on September 21, 2022 and will consist of 12 episodes. A second season, which concludes the series, is in development with an estimated 2024 arrival.

Followed by Ahsoka in production order.

"There will be no rules going forward."