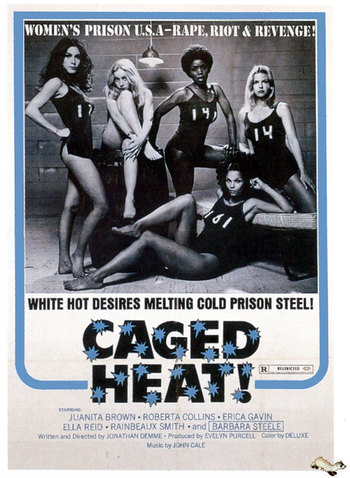 Caged Heat is a 1974 film directed by Jonathan Demme, produced by Roger Corman.

It's a "women in prison" movie. Jacqueline Wilson (Erica Gavin) goes to prison, evidently on a narcotics charge. She makes friends with two other very good-looking prisoners: Belle, a gorgeous blonde, and Pandora, a tall, curvaceous black woman. Jacqueline makes an enemy out of a mean, tough prisoner named Maggie. Unfortunately the prison they are all locked up in is a cruel and savage place ruled by an evil warden, McQueen (Barbara Steele, known as a scream queen of European horror films).

An argument in the prison kitchen leads to Maggie grabbing a gun, shooting a guard, and going on an abortive escape attempt. Jacqueline had nothing to do with the escape attempt but she was in the kitchen, so both she and Maggie go through brutal Electric Torture at the hands of the perverted (male) prison doctor, Dr. Randolph. Soon after, Jacqueline and Maggie escape for real.