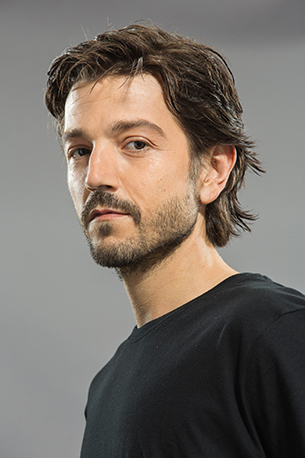 "Rebellions are built on hope."
Advertisement:

His parents are Alejandro Luna, a respected theatrical set designer in Mexico, and Fiona Alexander, a British expat who worked as a costume designer until her death in a car accident when Diego was a toddler. Alejandro started taking young Diego to work with him at the theatre, which eventually led to Diego taking his first acting role at age six in the theatre play his father had been working on, and the rest is history.

Luna is known for his childhood telenovela work, activism, and supporting roles in American films like Milk, Elysium, and The Terminal. He also starred in Y tu mamá también with Gael García Bernal, his childhood best friend and fellow actor, which brought both him and Bernal international attention and launched their careers outside Latin America, and voiced lead character Manolo Sanchez in the film The Book of Life.

In 2016, he starred in Star Wars anthology film Rogue One as Captain Cassian Andor, re-catapulting him back into international attention. He reprised the role in Andor.

In addition to his acting career, Luna is also a social justice activist for Mexican immigrants and citizens and has spoken out against the current corruption of the Mexican government. The documentary that he directed on famed labour leader Cesar Chavez

was shown at a special screening at the U.S. White House

He and Gael García Bernal co-founded Canana Films, an independent film company. They also partnered in founding Ambulante A.C., an organisation that works to bring documentary films to places where they are rarely shown.

He is not related to Gabriel Luna.