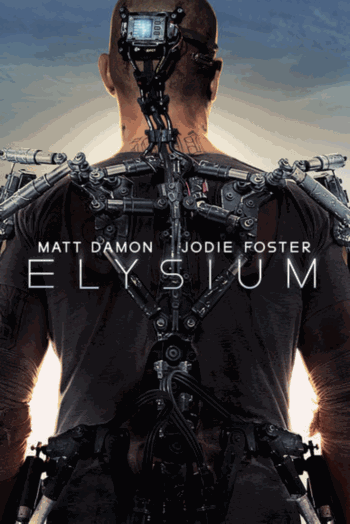 "They will hunt you to the edge of the Earth for this..."

In the year 2154, the rich live on Elysium, a Stanford torus high-tech utopian space station watched over by Secretary of Defense Jessica Delacourt (Jodie Foster) located in orbit around Earth which is free of crime, war, poverty, hunger, and disease, while everyone else - a.k.a. the poor - lives on the overpopulated, ruined Earth below. The citizens of Elysium live a life of luxury, which includes access to private medical machines offering instant cures, while the citizens of Earth exist in constant poverty and struggle to survive on a daily basis and desperately try escaping the planet (and not trying to escape the planet to live on Elysium, just to break into someone's house to use a medical machine before they are deported back to earth). Those who maintain Elysium will stop at nothing to enforce anti-immigration laws and preserve their citizens' lifestyle, even destroying ships that attempt to get there.

After an industrial accident leaves him with severe radiation poisoning, thirty-six year-old former car-thief-turned-factory-worker Max DaCosta (Matt Damon) has only five days to get to Elysium in order to be cured. Max straps into a powerful exoskeleton and attempts to kidnap a rich businessman (William Fichtner) in order to steal his identity and hijack his way into Elysium. This pits him against Delacourt and her violent secret police forces, led by Kruger (Sharlto Copley).