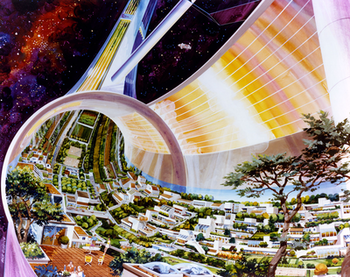 A new home for mankind, where people are born and raised... and die.
"This world. Looping. Repeating... forever. Is it a symbol of life or a cruel joke by the Forerunners?
— Escharum, Halo Infinite
Advertisement:

One of the World Shapes more often found in Science Fiction than in Fantasy, a Ring World Planet is a world in the shape of a concave cylinder. The horizon curves up, not down, but only in one dimension, meaning that the ground in that direction would be "uphill"note If gravity is generated by spinning the cylinder, it would only look like it was uphill. The surface would be "level" as far as walking, water flow, etc is concerned. unless the ring is large enough that the curve is impossible to notice over small distances. The sides of the cylinder will be walls, with or without a "ceiling." These can range in size from the equivalent of a true Dyson Sphere to a cylindrical space station in planetary orbit. These variants of worlds usually at least pay some lip service to the known laws of physics, since a spinning ring generates a centrifugal force that could be used instead of gravity. However to exist for real, particularly large ones over a few dozen kilometers would have to be made of Unobtainium.

Note that it would always be "day" in such a cylindrical world unless measures are taken to simulate day and night, either through sun shades, mirrors, or some combination of the above. Another alternative is choosing an orbit where the ring periodically gets shadowed by something. Orbits that use the Earth for this would produce night about every 90 minutes (ISS altitude) or a few minutes every few months (a typical geostationary orbit, about the same frequency as a lunar eclipse).

These were formerly referred to as "Niven's Rings" by physicists, astronomers, and science fiction writers, after the Trope Maker, author Larry Niven (who thought it up as a mid-point between a Dyson Sphere and a planet), in his novel Ringworld, but, following feasibility studies, have since adopted proper nomenclatural names of "Stanford Torus",

and, for the larger version, "Bishop Ring,"

while the term "Niven's Ring" remains the designation for colossal megastructures with a star in their center.