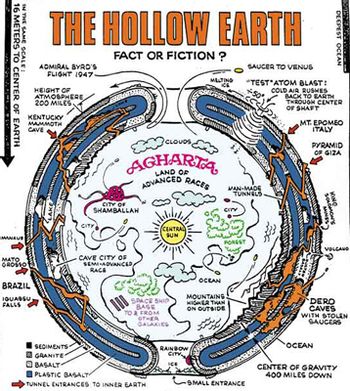 So, mainstream scientists today believe that the Earth under our feet has a lot of molten rock and metal filling it and have gathered a lot of pretty solid evidence for it. The only complication is that we've never been able to send a human down more than several miles to actually study it up close, largely because No One Could Survive That! Which is why since times that are Older Than Radio, early scientists, writers and more than a few crackpots have believed that there just might be something... or indeed, someone (say, Ultra Terrestrials)... down there, possibly powered by a suitably sized sun in the center.

The most known early example is Jules Verne's Journey to the Center of the Earth, although he likely drew from theories of his time. When science started to switch over to the modern view of Earth's composition the idea of the hollow earth became a Discredited Trope, but later generations of Speculative Fiction writers took up the concept and revitalized it, making it a staple of pulpy Two-Fisted Tales. Sci-Fi works bring us hollow world concepts such as the Dyson Sphere, which is a Hollow World taken to a solar system scale, and other variations of artificially constructed worlds.

Note that its usual configuration, with people walking about on the inner surface, wouldn't work; a hollow sphere has no net gravitational pull on any object inside it. Although some theorists, such as John Symmes,

claim that this actually could work due to the centrifugal force

caused by the planet's rotation. However, not only would this only work at the equator, it would still have to be very low, otherwise the planet itself would break apart.note The centrifugal acceleration at Earth's equator is only 0.003g.

A related belief is that of "Concave Hollow Earth": that Earth is actually a hollow bubble inside an infinite mass of rock.

A sub-trope of World Shapes and, in more modern works, an example of All Theories Are True. Compare Beneath the Earth, Dyson Sphere, Planetary Core Manipulation. When the inhabitants don't know they're in a hollow world, it may become a City in a Bottle or a Lost World.

May contain Living Dinosaurs and/or Lizard Folk, The Morlocks, Fungus Humongous, the occasional Underground City, and at least one Crystal Landscape of unspeakable beauty.

Not to be confused with Hollow Earth the series.