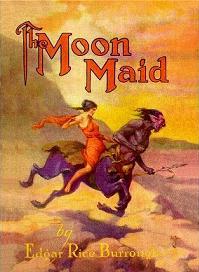 The first of the trilogy.
"The Moon Maid", "The Moon Men", and "The Red Hawk" are three works by Edgar Rice Burroughs, forming a future history in which the first Earthmen to visit the Moon discover it to have sapient inhabitants. After being serialized in Argosy All-Story Weekly between 1923 and 1925, they were first published in book form in 1926, in a single volume with the title The Moon Maid.
Advertisement:

Subsequent editions have used a variety of titles, and variously presented the sequence as a single work, a duology, or a trilogy.

In "The Moon Maid" (May-June 1923), a spaceship from Earth captained by the hero, Julian, is forced to land on the Moon after the engines are sabotaged by his resentful second-in-command, Orthis. The Earthmen discover the Moon to be hollow and inhabited by several warring cultures, including the Laythe and the Kalkars. After many adventures, during which Julian meets and falls in love with the Moon princess Nah-ee-lah, they are able to repair the ship and return to Earth, taking Nah-ee-lah with them and leaving Orthis behind.

In "The Moon Men" (February-March 1925), Orthis gathers a force of hostile Kalkars and leads an invasion of Earth. Julian confronts Orthis, and both are killed, whereupon the story skips forward a hundred years to when Julian's descendant, also named Julian, becomes involved in the resistance against the Kalkar overlords.

In "The Red Hawk" (September 1925), the story skips forward again several centuries to show the final overthrow of the Kalkars by the tribes of humanity, featuring an alliance between the Tribe of Julian and the Tribe of Or-tis.