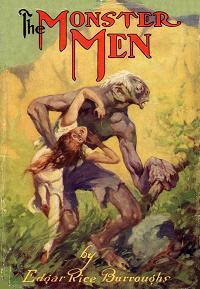 The Monster Men is a novel by Edgar Rice Burroughs — his take on the Mad Scientist theme. Professor Maxon, having disposed of his latest attempt to create life, takes to the ocean to recover. In Southeast Asia, he chooses to take his experiments up again on a Deserted Island. Pirates, treachery, and miswrought experiments threaten him and his beautiful daughter Virginia.
Advertisement: