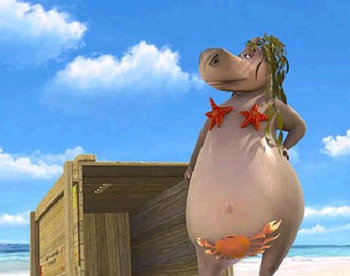 A character that ends up in a body of water may not emerge alone. Often, they'll come out with animals or plants attached to them. It may be grabbing on to them, draped over them, or even in their mouth! The types of creatures vary too — they can be anything from starfish to octopuses to crabs, and even seaweed or other plants!

It's more often than not Played for Laughs, and just how the creatures got there are left to the viewer's imagination. Some instances however do play this for horror or at least ickiness (some animals like leeches or candiru fish simply invoke too much nausea in audiences) and in general this trope is rooted on how sea life is "disgusting" to most people's sensibilities, implying at least some Cringe Comedy by default.