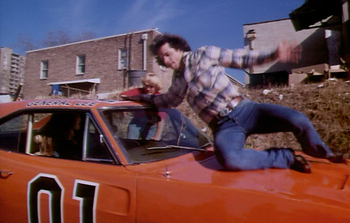 "I've always wanted to do this!" [slides across the hood of the car] "Nailed it!"
— Sonic, Sonic the Hedgehog (2020)
Advertisement:

A motor vehicle trope. When traversing the front of a car from one side to the other the character can either simply run around the front of the car or instead opt to jump at speed and slide across the hood of the car. The bad guy has just escaped in a car, or some characters are being pursued themselves and need to enter a car, or a car might be blocking the way in a chase on foot. Whatever the situation, time is precious and every millisecond counts. Performing a hood slide saves time but perhaps more importantly, it looks badass!

Considered a staple of The '70s cop show, any work that parodies the genre is bound to feature a hood slide somewhere. However many consider the Trope Codifier to be The Dukes of Hazzard which wasn't actually a cop show although it did indeed feature a lot of car chases allowing for a lot of hood slides to be featured.

This trope often leads to or is part of a Car Chase. Often involves cool cars.

Frank's and Dennis's characters both perform hood slides on a car in succession in the gang's Lethal Weapon sequel.

Frank's and Dennis's characters both perform hood slides on a car in succession in the gang's Lethal Weapon sequel.