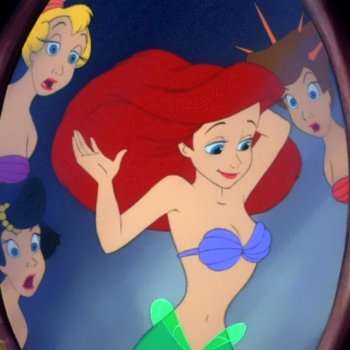 Bivalves are a girl's best friend.
Mimic: By th' way, nice seashells.
Siren: They're just B-shells, but thanks.
— Rusty and Co.
Advertisement:

For some reason, mermaids feel compelled to fashion bras for themselves out of seashells, even though they never bother making any other kind of clothing. Although this provides Fanservice and titillation, it was originally created for the reverse reason. Logically (as in, using the same logic that would apply to humans *cough*), a mermaid would be an Innocent Fanservice Girl, but we can't have that in a kids' movie, can we?

Since, by definition, a mermaid is a fish from the waist down, only her top half must be covered, and often Godiva Hair just won't do. Thus the seashell bra was invented to preserve the modesty of female merfolk everywhere. You probably think this originated with Disney's The Little Mermaid, but Disney was using it all the way back in 1953 to depict the mermaids in Peter Pan (although they looked distinctly less bra-like in those days). Expect bras to also be made out of other marine trappings, such as starfish (though glomping a living creature to one's own body doesn't sound like a good idea in hindsight — especially if it ejects its stomach and starts digesting your nipples) or perhaps seaweed or other vague underwater flora, though the shells are often depicted as somehow clinging magically without any accompanying harnesses or straps, seaweed or otherwise. Also, the bra will almost always be made from scallop shells rather than clam, oyster, conch, or nautilus shells

◊ (not unless they are hollowed out).

Of course, not every culture shares the notion that the sight of female nipples somehow corrupts children, hence the Japanese animated version of the classic Hans Christian Anderson tale features bare-chested mermaids. It's also possible to avert the whole issue entirely by having scales growing around the chest area, extend the "fish" part of the mermaid up to the bustline like a strapless dress, or simply not draw any nipples at all.