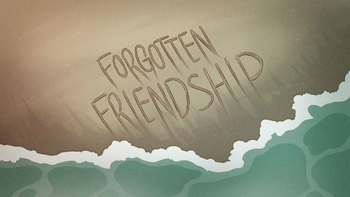 Four films and years of Character Development are about to be erased...

My Little Pony: Equestria Girls – Forgotten Friendship is an animated hour-long cartoon special set in the My Little Pony: Equestria Girls series. The special was adapted into book form two months prior to the release of the special in the Equestria Girls novel "A Friendship to Remember". It first aired on February 17, 2018. The special was later uploaded onto Hasbro's YouTube channel in serial form under the titles Sunset Shimmer's Saga and Most Likely to be Forgotten starting on March 9, 2018. This version contains extra footage that was cut from the broadcast version.

An official promo for the cartoon reads: "In this brand new one-hour special, Sunset Shimmer is shocked when she discovers she's been erased from her friends' memories, leading her to search for the magic and the perpetrator who did such a dreadful deed."

A teaser for the special can be found here

The Sunset Shimmer's Saga version can be found below:

Sunset realizes upon her friends acting like she was the bully they've known in the past, she was magically erased from their memories of their adventures.

Sunset realizes upon her friends acting like she was the bully they've known in the past, she was magically erased from their memories of their adventures.