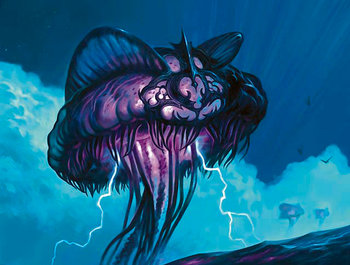 Sweet Jesus! Jellies!
Rusty: Yeah, you're an Electric-type! That's why you got all those wires!
Tentacool's ghost: Wh--I clearly am not! I've got a whole jellyfish thing going on!
—Pokémon Rusty
Advertisement:

You don't want to mess with jellyfish. Not that they're easy to annoy — they don't even have brains — but if you get in the way of one of their tentacles, you can expect a nasty, venomous sting.

That's true in media too, but with one little difference. When a fictional character has a run-in with a jelly it often sets their hair standing on end, with sparks flying or some other electric effect surrounding the victim — as if they'd just gotten a dose of Harmless Electrocution.

In many cases, it's just a visual or audio effect used to show the viewer that the stinging is actually occurring and that said stinging feels like getting shocked. Other times the jellyfish is actually shown to have a literal electric discharge, as if it were an electric eel — perhaps even a psychotic one.

Complicating matters are the jellyfish relatives known as comb jellies,

some species of which look like they are wired up with LED light bulbs as a result of light diffraction in their tissues.

Squidward exploits this trope by tricking a Pinky into shocking a chargeless generator in order to activate it.

Squidward exploits this trope by tricking a Pinky into shocking a chargeless generator in order to activate it.