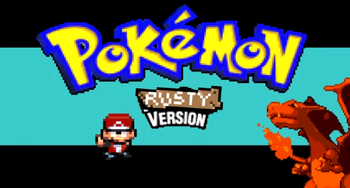 He's gonna be the very worst, like no one ever was.
Advertisement:

Pokémon Rusty is a series of shorts by Dorkly parodying the Pokémon franchise while also telling an original story.

The story focuses on a 10-year-old boy named Rusty, who lives in Beige Town, a town so insignificant that it's not even on the map. Together with his Kakuna, named "Pikachu"—after his hero Red's favorite Pokémon—Rusty sets out to be the best Pokémon Trainer there is, completely oblivious that he is, in fact, the very worst.

The entire series can be found here.

On October 21, 2017, a Spiritual Successor called Pokémon Ralphie debuted, starring a former Bug Catcher named Ralphie who is under the delusion that he is Red's number one rival.

Nobody could have ever replaced Rusty's beloved Pikachu ... well except Pikachu 2.

Nobody could have ever replaced Rusty's beloved Pikachu ... well except Pikachu 2.