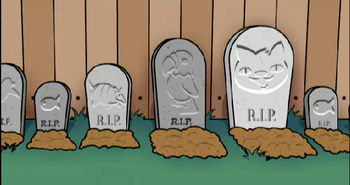 Here lies Fluffy and Bubbles and Rover and Polly and… wait, is that an armadillo?
"So far I've killed my frog, two gerbils, 16 goldfish, a Schnauzer, and a Dachshund. This is the only bastard that survived me."
— Keiichirou Miyanoshita, Ghost Stories Gag Dub
Advertisement:

Whether it's a propensity for overly-tight hugs, frequent life-threatening hijinks, complete cluelessness about pets' needs, or something else entirely

, this person should not be allowed to own animals. Period.

Oddly, this trope can be played for laughs, fear, creepiness, or tragedy depending on the work.