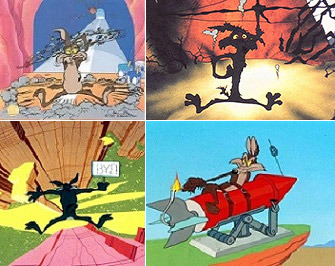 So, you've got a funny character in a Slapstick, just lining up a wave of truly incredibly bad and unlucky physical traumas for the character to wade through for your audience's twisted amusement. Just one problem. The things your character is about to go through would kill any normal being. Enter the Iron Butt-Monkey, who can render lethal trauma into mere Amusing Injuries... at least when it's funny.

A type of Acceptable Breaks from Reality, the Iron Butt Monkey is, simply put, practically immune to harm... purely for the purpose of having hilarious injuries happen to him. Drop an anvil on him? He simply gets a nasty looking lump or is Squashed Flat only to reform once the weight is removed. Throw him off a cliff and watch him bounce down in a brutal manner? He'll be fine by the next scene. Incinerate him? He'll reform from the ashes or even simply be back next episode. One wonders how many lives this guy could save in the military.

Primarily an animation trope, Western Animation is particularly fond of this one. Bonus points if the Iron Butt Monkey is merely annoyed or embarrassed by his injuries when he should be screaming in pain.

A relation of Butt-Monkey, Made of Iron, and Slapstick. Where this is used on characters who in-canon have explicit super-healing, see Good Thing You Can Heal and Immortality Hurts. Unrelated to the Iron Woobie, although they can overlap at times.