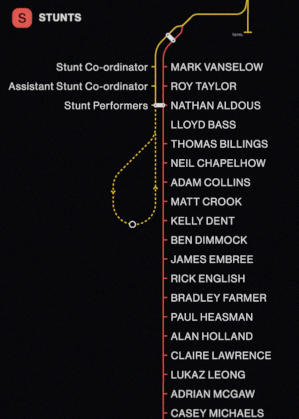 Train station credits. Putting "art" in "work".
"The end credits for Pixar films are more entertaining than half the films I see."
— Richard Roeper

Closing Credits usually consist of a black screen and white text. The names of the cast and crew scroll slowly up the screen, while some sort of music plays. After the various moments of Funny, Heartwarming, Tear Jerker, Nightmare Fuel, or Awesome, they're pretty anti-climactic. Most people leave once the credits start, because hey — Closing Credits can be boring.

But they don't have to be! Sometimes, the producers shell out a bit of extra coin and the result is closing credits with awesome music, awesome graphics, and an awesome concept. These credits exist to entertain the audience even after the film is over, so they'll stick around— and the cast and crew will finally get some of the recognition they deserve. note  Usually, after this is done, the credits will be white on black scrolling anyway.

Or they would, if the audience weren't distracted by the totally awesome credits.

Some of these are in the form of a "Where Are They Now?" Epilogue or Hilarious Outtakes, but most are simply interesting takes on the credits sequence. See also Credits Montage, Mini-Game Credits, Finale Credits, Video Credits. Compare Credits Gag (a joke within the credits), The Stinger. Contrast Artistic Title, Animated Credits Opening. Expect fan rage if a TV broadcast treats this to a Credits Pushback.

If you have further interest on the subject, Forget the Film, Watch the Titles

and The Art of the Title Sequence

are entire sites devoted to showcasing creative closing and opening titles (with accompanying Word of God and videos).