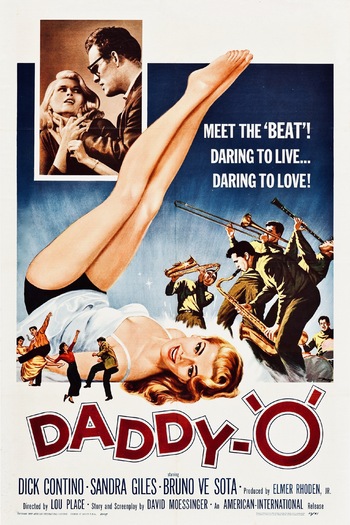 Phil Sandifer (Contino), a high-panted, smooth-crooning, truck-driving hepcat known by his friends as "Daddy-O", meets blond bombshell Jana Ryan (Giles) when she tries to run his truck off the road. Guy meets girl again at a nightclub, after which they have a drag race. Meanwhile, Daddy-O's best friend Sonny is run off the road by drug-dealing bad guys and dies in the crash. Though our hero is arrested and briefly accused of causing the accident himself, he is soon exonerated — but still gets his driver's license suspended.

Wanting to find out who's actually responsible for Sonny's death, Daddy-O turns detective and goes undercover as a singer at the bad guys' nightclub, where he belts out "Rock Candy Baby"

and moonlights by driving the drug smugglers' car. Jana, wanting to help investigate, also takes a job at the club as a cigarette girl, against our hero's wishes. Somehow or other, though they bicker constantly, the good guys manage to fall in love and solve the crime.

The music score was composed by some newbie named John Williams. Whatever happened to him, anyhow?