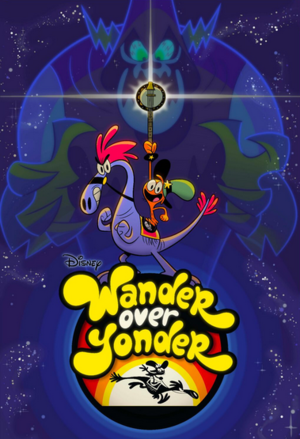 Wander over Yonder is an animated Disney Channel original series, the third to be created by animation-legend Craig McCracken and his first not to air on Cartoon Network. Lauren Faust was a co-producer and story editor on the first season. A preview aired on August 16th, 2013 following the premiere of Phineas and Ferb: Mission Marvel. The first season started on September 13th.

The show is about the exploits of Wander (Jack McBrayer), a furry, orange, extremely optimistic hippie-thing and his faithful steed Sylvia (April Winchell) as they travel across the galaxy spreading freedom and happiness, all while under the watch of the evil (yet extremely childish) Lord Hater (Keith Ferguson), his long-suffering henchman Commander Peepers (Tom Kenny), and his army of Watchdogs.

The general feel and look of the series pays much homage to animation and popular culture from The '60s (a pretty standard motif of McCracken's works, really), as well as Ward Kimball's 1950's space projects for Disney. However, in a departure from the flat, rather stylized art normally associated with McCracken, Wander favours a bouncier and more expressive animation style reminiscent of classic Looney Tunes (Eddie Trigueros, one of the show's key directors and storyboard artists, is a modern day master of the style). All in all, it's one heck of a trip.

The series' shift into a more serialized format during the second series, which saw the main cast dealing with the arrival of Lord Dominator, a much more dangerous opponent than Hater, was extremely well-received.

The show is McCracken's first to be ended by network demand rather than by his own decision: despite good ratings, the crew having detailed plans for a third season, and devoted fans Sending Stuff to Save the Show, the series' second season would be its last. The staff was given soon enough notice by Disney to be able to stage a proper Grand Finale, though it ended on a possible Sequel Hook.

Now with its own Best Episode

Its recap page could use a little love, and a hug.

Wander and Sylvia tell some victims to a rude troll not to pay his insults any heed in order to weaken him.

Example of:
Just Ignore It

Ask Her a Question

Wander and Sylvia tell some victims to a rude troll not to pay his insults any heed in order to weaken him.

Ask Her a Question