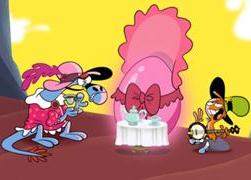 The Epic Quest of Unfathomable Difficulty

The Eye in the Skull Ship

The Search for Captain Tim

The End of the Galaxy