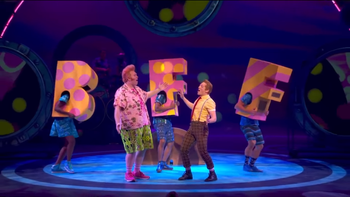 The Power of Friendship is one of the strongest things in the world. Sometimes, however, it's not enough. What's the best way to really capitalize on a friendship? Break out in song about it, of course.

This is essentially a song that explains about how the friendship between two or more characters keeps them together, often in literal as well as figurative harmony, and never lets them fall apart.

This may be a Sidekick Song. Compare Silly Love Song, Ode to Family, and Parental Love Song. May overlap with Song of Many Emotions if it mentions the friends feeling different emotions together.

"Friends" is a friendship song featured the "The Raccoons" special "Let's Dance," performed by John Schneider and Dottie West.

I Can Lift You Up

"Friends" is a friendship song featured the "The Raccoons" special "Let's Dance," performed by John Schneider and Dottie West.

I Can Lift You Up