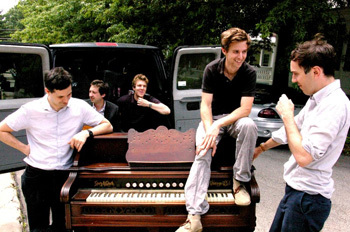 The Walkmen were an American indie rock/post-punk revival band, commonly associated with the NYC rock scene of the '00s and based in New York City, Washington, D.C. and Philadelphia.

The band formed in 2000 with three members from Jonathan Fire*Eater—Paul Maroon (guitar, piano), Walter Martin (organ/bass), and Matt Barrick (drums) — and two from The Recoys, Peter Bauer (bass/organ) and Hamilton Leithauser (vocals, guitar). They went on an indefinite hiatus in 2014, after releasing seven studio albums.