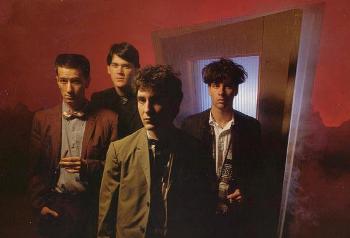 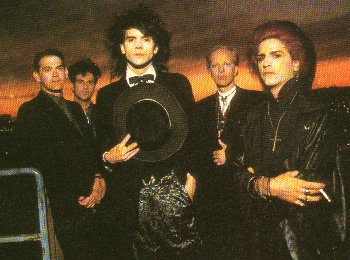 Wall of Voodoo was a New Wave band in The '80s. Formed in Los Angeles in 1977, the band had two line-ups: one with Stan Ridgway as singer, another with Andy Prieboy. The band's earlier sound (less so on the later albums) could be described as something much different, not unlike Devo. But instead of electronic dance music, their style was "Ennio Morricone meets New Wave". They made two original hits, "Mexican Radio" and "Far Side of Crazy".

The first main line-up, with Stan Ridgway on vocals, also had Marc Moreland (guitar), Bruce Moreland (bass, synthesizer), Chas T. Gray (synthesizer, vocals), and Joe Nanini (percussion). The band also extensively used a drum machine (given to Stan by voice acting legend Daws Butler) to back them up on albums and in live performances, with Nanini usually adding fills on old pots and pans, cowbells, and various percussive toys. After their first full release, Dark Continent, Bruce had to leave because of his drug problems. Bassist and producer Bill Nolan came in as a replacement, and this line-up would record the song "Mexican Radio."

In 1983, after a performance at the US Festival, Stan, Joe, and Bill jumped ship. Stan would go on to make an impressive solo career for himself, with his latest album, Mr. Trouble, released in 2012. He collaborated with Stewart Copeland on several occasions; e.g., the Rumble Fish soundtrack.

After Ridgway's departure, Marc, and Chas struggled to keep the band alive, despite Bruce coming back just in (the wrong) time. Luckily, two new members — singer Andy Prieboy and drummer Ned Leukhardt — joined up and the band released a new single, "Big City," in 1985. A new album, Seven Days in Sammystown, shortly followed. One of Sammytown's tracks, "Far Side of Crazy", became a major hit in Australia, allowing the new WOV to make two more LPs, the last one being a Live Album. Bruce left the band again (same reasons) midway through Happy Planet's sessions. Chas had to fill in for him, playing the bass on most of the record. Guest players were invited for live shows.

After the live LP, the band got dropped by IRS Records (along with many others; musical tastes were changing). Though most of the members faded into relative obscurity, Andy decided to continue. In 1990 he released ... Upon My Wicked Son, which consisted mostly of songs he wrote for WOV, with Ned on drums and Marc playing guitar on some of the tracks. After that, Andy released two more albums (the latest in 2010) and wrote the musical White Trash Wins Lotto

which was actually covered by Concrete Blonde first.

Original drummer Joe Nanini passed away in 2000 of a brain hemorrhage, whilst guitarist Marc Moreland died in 2002 after complications from a liver transplant. However, he managed to record his own solo record, Take It To the Spotlight, shortly before that. He also played with the one-shots Pretty and Twisted and Department of Crooks.

Both Stan Ridgway and Andy Prieboy are still musically active. They performed together on Andy's song "Shine" (Stan was on harmonica).

Chas Grey left the music business behind, and now owns a Mexican restaurant in Norway. Ned Leukhardt hasn't been musically active either.

Bruce Moreland got over his addictions (for good), and formed a new solo act, Ravens Moreland, releasing records since 2007. More recently (as of 2012), he formed Something Died in Memphis. He played with Andy in concert in spring of 2014.

Two proper music videos were made for "Mexican Radio"

and "Far Side of Crazy"

. A promotional video was made for "Call Box"

Wall of Voodoo were signed to the I.R.S. Records label.

The band had provided examples of the following: