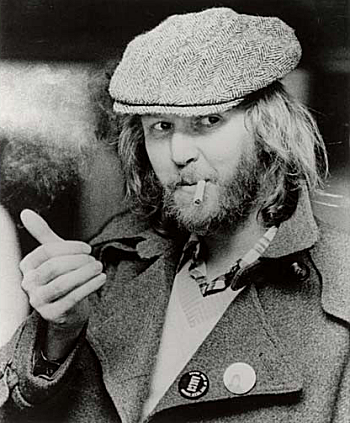 "Everybody's talkin' at me..."
Well in 1941 a happy father had a son
and by 1944 the father walked right out the door
And in '45 the mom and son were still alive
but who could tell in '46 if the two were to survive
Well the years were passing quickly
but not fast enough for him
So he closed his eyes through '55
and he opened them up again
When he looked around he saw a clown
and the clown seemed very gay
And he set that night to join that circus clown and run away
— "1941"
Advertisement:

Harry Edward Nilsson III (June 15, 1941 – January 15, 1994), sometimes credited as simply Nilsson, was an American singer/songwriter with a versatile voice that boasted multiple octaves in its prime. An idiosyncratic, savvy composer with a unique flair for Cloud Cuckooland-ishness, his career saw him going from clean-cut baroque pop prodigy to scruffy, carousing pop-rocker. Rather uniquely for the period, he was a Reclusive Artist who seldom, if ever, performed live, his career sustained by little else than his recorded output.

In the first part of The '60s Nilsson pursued a music career while he also held a steady job as a computer programmer at a California bank. After years of writing songs and recording demos, he was signed to RCA Records in 1967. His work earned the admiration of The Beatles (Ringo Starr eventually became a close friend), which needless to say did wonders for his own notability. His big commercial break came when his cover of "Everybody's Talkin'" (originally written by Fred Neil) was featured in the film Midnight Cowboy, earning him a Grammy for Best Male Pop Vocal Performance in the process. He would win the same award again a few years later for his performance of what has now become a pop standard; "Without You" (written by Pete Ham and Tom Evans of Badfinger).

His fame peaked in the early 1970s; as time went on, Nilsson's continuing drug and alcohol abuse took a toll on both his voice and career; his career as a recording artist ended with the release of his last album in 1980. His untimely death of heart failure in 1994 occurred just as he was aiming for a musical comeback.

"Put the Tropes in the coconut and call me in the morning."