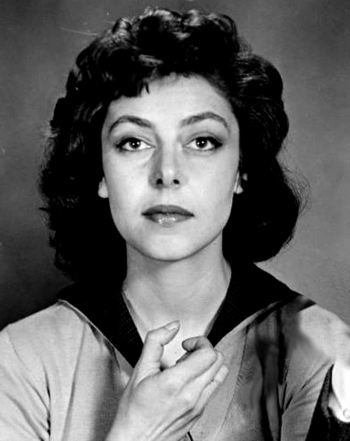 Elaine May (born Elaine Iva Berlin; April 21, 1932 in Philadelphia, Pennsylvania) is an American actress, comedian, writer and filmmaker from Philadelphia. Her earliest fame came in the late 1950s, as half of the improvisational comedy team Nichols and May, with partner Mike Nichols.

In 1971, she wrote and directed her first film, A New Leaf, in which she also starred along with Walter Matthau. The original three-hour cut of the film was heavily edited by the studio, which caused May to disclaim the final version of the film.

Her next film, The Heartbreak Kid (1972), was written by Neil Simon and gave Charles Grodin his first starring film role. A critical favorite (even earning a couple Academy Award nominations), it has long been considered a comedy classic and was remade in 2007.

It was followed by Mikey and Nicky (1976), an improv-heavy mob-themed drama starring John Cassavetes and Peter Falk. Once again May faced Executive Meddling, resulting in legal action between her and the studio, which delayed the film's release by several years.

Her last film as writer and director, Ishtar (1987), starred Warren Beatty and Dustin Hoffman. It was widely panned by critics and audiences on release but has gained in esteem over the years, and is frequently cited as a favorite of directors such as Martin Scorsese and Quentin Tarantino.

In addition to her own directorial efforts, May has written or co-written the screenplays for such films as Beatty's Heaven Can Wait (1978) and Nichols' The Birdcage (1996) and Primary Colors (1998). She has also had a side career as a playwright, writing several plays in the years after her Hollywood directing career ended.

In addition to her role in her own film A New Leaf noted above, May has acted in a handful of films, including a bit part in The Graduate and starring roles in the films Small Time Crooks and California Suite. Appearing on Broadway in the play The Waverly Gallery in 2018, she received universal praise, and at age 87 won a Tony Award for Best Actress in a Play. Her chaotic filmmaking career received the ultimate Vindicated by History honor when it was announced in 2021 that she would receive an honorary Oscar. She's also a Grammy Award winner: An Evening with Mike Nichols and Elaine May won for Best Comedy album in 1962.