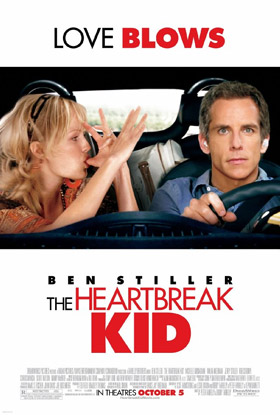 The Heartbreak Kid is a 2007 romantic comedy directed by the Farrelly Brothers starring Ben Stiller, Malin Åkerman and Michelle Monaghan. It is a remake of the 1972 film of the same name. Nothing to do with Shawn "The Heartbreak Kid" Michaels.
Advertisement:

Eddie (Ben Stiller) is a single man who is afraid of having a serious relationship. One day, Eddie witnesses a woman being robbed in the street. He tries to help, and fails miserably. Despite this, the woman named Lila (Malin Åkerman) is grateful for the help. The two go out on a date and quickly engage in a relationship. Lila is gorgeous, kind and adorable, charming Eddie. However, Lila reveals to Eddie that the company she works for will force her to move to Holland... unless she is married. Pressured by his father and his best friend, Eddie asks Lila to marry him.

Unfortunately, during their honeymoon trip, Eddie discovers that Lila is far from the perfect human being she appeared to be. Lila turns out to be an ignorant, obnoxious woman with a history of drinking and drug abuse, owing money to several people, working as a volunteer and with an addiction to wild (and painful) sex.

During their honeymoon in Los Cabos, Eddie has already lost all the love he felt for Lila. And then the situation worsens when he meets one of the hotel's guests, the beautiful and kind Miranda (Michelle Monaghan), and falls madly in love with her.