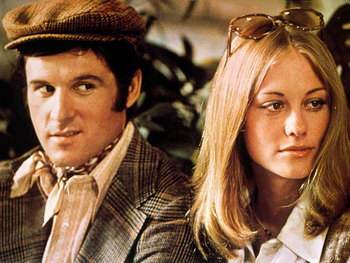 The Heartbreak Kid is a 1972 romantic comedy-drama film with a darkly satirical edge, directed by Elaine May and scripted by Neil Simon, who adapted Bruce Jay Friedman's short story "A Change of Plan".

Charles Grodin plays Lenny Cantrow, a sporting goods salesman who marries a Nice Jewish Girl named Lila Kolodny (Jeannie Berlin) after a very brief courtship. While they're on their honeymoon in Miami, Lila's odd habits, neuroses, and general awkwardness become increasingly unbearable, and Lenny soon comes to realize that he doesn't actually love her or even like her very much. When he sees blonde WASP goddess Kelly Corcoran (Cybill Shepherd) on the beach, Lenny is instantly enchancted and goes all-out in pursuit of her, not letting the fact that he's married get in the way.

The film was remade in 2007 by the Farrelly Brothers with Ben Stiller, Malin Åkerman and Michelle Monaghan in the main roles.

"There's no deceit in these Tropes":