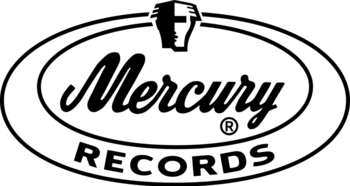 Mercury's logo throughout most of The '50s and The '60s. In Colombia, it remained in use as late as 1982, and a few British releases used it for nostalgia's sake during The '80s. 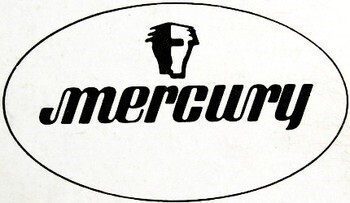 Mercury's longest-lived logo; it lasted from 1968 to 1995, and versions of it are still used in some parts of the world.

Mercury Records is one of America's foremost music labels.

Named after the Roman god (whose stylized portrait frequently appears on the logo), Mercury was founded in Chicago in 1945. It grew quickly, and by the mid-1950s it had become one of the "Big Six" that dominated the US record industrynote along with Columbia, RCA Victor, US Decca, Capitol and MGM. Mercury expanded even further in 1961, when it was acquired by the Dutch electronics/music conglomerate Philips, which had just lost the European distribution rights to Columbia Records and wanted direct access to American talent.note A few years earlier, Philips' British competitor EMI had purchased Capitol for similar reasons. This deal worked both ways, as Mercury got to distribute Philips Records in America, as well as its sublabels such as Fontana and (eventually) Vertigo, giving them access to many international performers. Mercury also founded Smash, a sublabel focusing on popular music, that had a similar relationship to its parent label that Reprise Records did to Warner (Bros.) Records.

In 1972, Mercury became part of PolyGram, which consolidated the Philips family of labels (whose parent company had become known as Phonogram) with Polydor and Deutsche Grammophon (and also spun off PolyGram Filmed Entertainment). PolyGram lasted until 1998, when Universal added the company to its existing MCA Records label, creating the super-conglomerate Universal Music Group. UMG kept Mercury going for a while, then retired the imprint, then brought it back; since then, the Mercury name has disappeared and reappeared at sporadic intervals in America, although it's remained in use in Europe and Australia, and in 2017 it was revived in Japan.

Mercury Records performers, past and present, with TV Tropes pages: